A few inches above, a few below!


Inches Above!  Inches Below!

What has become our annual trip south was very different this year, for two reasons; first we had a crewmate and second, we decided to take Spill The Wine down parts of the Intracoastal Waterway (ICW).  Both were new ground for us.


We had some illness in the family, and so we were concerned that at some point one or more of us would have to jump off the boat and return home.  Our solution was to start asking around to see if anyone wanted to sail with us to Florida.  We thought an extra crew mate would give us flexibility in the event Barb had to quickly return home.  Finding that extra crew didn't take long.


Sam worked throughout the summer on a sight seeing sailboat which occupied the next slip beside ours in Baltimore.  After finishing college in Florida and before returning home to Hong Kong, he decided to get a job on the tour boat for the summer, and as such, we had a nice opportunity to get to know him over the season.  Once the idea of sailing to Florida was brought up in conversation, in about the same amount of time it takes a person to blink, he decided he was in for the ride down the east coast with us.  We're glad he did!

The three weeks passed quickly and easily with Sam on board.  It was really nice having an extra person rotating shifts.  Everyone got caught up on reading, surfing the web, napping, but most importantly: GAME OF THRONES!

On a whim, right before shoving, I bought seasons 1-6 in a box set.  Barb and I had never seen an episode, and as it turned out, Sam is a Game of Thrones expert who was more than happy to spend most every night binge watching with us.  So the trip down the coast mostly went like this:
Wake up at dawn

Sail or motor all day

Drop the hook around dusk

Stay up most of the night watching Game of Thrones

There’s an old adage about the Intracoastal Waterway (ICW) that goes like this:

"There are two kinds of boats on the ICW,

those that have run aground,

and those that are about to"

We wanted to try the ICW because we’d heard so many wonderful things about it.  The beautiful anchorages, the interesting narrow passages, and the endless way human beings design and build bridges have always held us in intrigue.  But we’ve always felt Spill The Wine is an ocean going yacht, and as such, have always stayed on the ocean where she is happiest.  Still, the waterway has always tempted us - perhaps the expression “The Grass is Always Greener on the Other Side” oddly applies.

The ICW is supposed to be dredged to 12 feet.  That's what the Coast Guard states, but they also clearly state that because of lack of funding, it's nowhere near that deep.    Just for reference, Spill The Wine draws five feet three inches below the waterline, but fully loaded as she tends to be, she likely draws a bit more.  That’s the problem downward.

The problem upward is that Spill The Wine’s mast rises 63 feet and 6 inches in the air, but she has an abundance of instruments atop her mast which makes her easily rise close to 67 feet.  Fixed bridges on the ICW are only 65 feet high, but there are a few which are actually less, notably at 64 feet.  Thus, we practiced at the dock in Baltimore and learned how to go up the mast and take down or mount sideways all the instruments, so we could indeed rise a mere 63 feet, 6 inches.

So, with inches of water below our keel, and inches of air between our mast and the fixed bridges above…. We went in!

Not only did we go into the ICW to satisfy our curiosity, but once we arrived at the bottom of the Chesapeake Bay the wind wasn’t the type a sailor wants to round the outer banks of North Carolina, so we felt we could actually save time by taking the ICW as opposed to waiting for better weather.

Just as a note of reference, in the two and a half years we have owned Spill The Wine, we had only gone under one 65-foot bridge, and in that process, we bent and damaged the lighting arrester sitting atop the mast, all while we listened to the VHF antenna bend and scrap against the concrete above our heads.  That experience definitely left us with the distinct impression that 65-foot bridges are NOT our friends.

If I recall correctly, our first day south of Norfolk, Virginia, where we entered the ICW, we passed through 12 bridges, about half of them draw bridges and half of them fixed at 65 feet.   I’m certain if we had had a blood pressure meter attached to ourselves, you would have seen some significant spikes at every 65-foot bridge we navigated through.   But we adapted, and eventually even relaxed.

The only real drama came one day late in the afternoon when we approached a bridge and the washboards (signs which indicate bridge clearance) showed 63 feet.  We decided to anchor and wait for the tide to fall before going under.  Unfortunately, we were in a narrow passage and the lower tide which would guarantee our passage occurred well after dark - so we cooked and watched Game of Thrones and then late in the evening, pulled up the anchor, went under the bridge, motored to a nearby anchorage, and dropped the hook again.  Have I ever mentioned I have a serious dislike for anchoring in unknown narrow places in the dark?  Probably not

So, all in all, no real issues with the concrete and steel above us.  I wish I could say the same for the mud below us.


Poor Sam was on the helm during our first grounding.  Moments before, he called down the companionway “there is some current here, I think I’ll slow down.”   And then, almost immediately, we felt “the lunge”.   When a 24 ton sailboat which is moving at 6 knots comes to a fairly quick and complete stop while sliding into the mud 5 feet below, you definitely feel something, and we decided to call that something “the lunge”.

Sam, at first, was mortified.  His eyes were wide open as he quickly looked around in all directions.  You could tell he couldn’t decide what to say as Barb and I bounced up the steps to the cockpit.  He looked frazzled, so much so Barb and I broke out in laughter.   Of course it helps when you know that an Island Packet has a full keel underneath her and a protected propeller, so running aground in the mud does zero damage … but Sam didn’t know that.  All he knew was that it was dead low tide, and we were stuck like a bug!  Soon enough though he took our lead and relaxed.  We tried backing out - but that was a no go, so we did the only reasonable thing… started a game of cards and waited for the tide to rise.

As we played cards, a group of boats came upon us. We radioed to them informing them of the shallow curve and advised them to stick to the far side.  Looking back, the most interesting part was when a lady with a thick German accent radioed back informing us:

“The proper way to unground yourself is to drop your dingy, attach it to your halyard, then motor the dingy perpendicular to your yacht allowing the yacht to heal and then motor off the mud.”

I’m not sure if it was her thick accent and broken English, or the fact she sounded as if she had a “Learning How to Sail” manual in her lap and was reading us the section on “Going Aground” word for word, but regardless, we all giggled.  We thanked her for her concern and continued our card game.  An hour later we felt the boat move, and so we started the yanmar engine and continued motoring our way along.  Barb won the card game by and by.

23 hours later, Barb was at the helm, and again, at dead low tide, we felt “the lunge.”   We came to a complete and sudden dead stop.  Sam was so happy that someone else ran aground, it took him no time at all to break out into laughter.  He even cheered!

We broke out the cards and started a new game, and began (what felt like our duty) to warn other boats as they appeared on our AIS about the shallow section of the ICW as they neared.

Then it happened, much to our chagrin.  How did this occur?  How did we get ahead of her?  Was it a curse?  A miracle?  We still don’t know!  The same boat that gave us the “ungrounding” directions before, the one with the thick German accent, started to read her text over the radio:

“The proper way to unground yourself is to drop your dingy, attach it to your halyard then motor the dingy perpendicular…….”

It was verbatim from the day before!  We couldn’t help ourselves … we laughed so hard we nearly peed our pants.


Thing 1: Thank you to the German lady who really tried to help … and know, when we responded on the VHF to thank you for your advice, the laughter in the background wasn’t at you … it was really at us, for grounding in the first place.

Thing 2: If you’re going to take a sailboat that draws around five and a half feet down the ICW, and you’re not willing to sit out the dead low tides, especially in Georgia… be prepared to run aground from time to time.

Thing 3: On these occasions, prepare yourself… Barb will beat you in cards!

For the record … I was on the helm when we ran aground the third time, but I was lucky enough to not feel the “whole lunge” and was able to back out.  Lucky me!

Once we pulled into Beaufort, North Carolina, the weather had changed for the better and we had several very nice days of ocean sailing before once again the weather talked us back into our  ICW experiment.  On the ocean, it was certainly nice to set sails, feel the waves, and make progress without the worries of making your way through narrow shallow canals.  But having said that, we’ll do the ICW more.  We feel like we’ve added a new tool in our sailing bag of fun!

And lastly, Sam, if you’re by chance reading this, thanks again for your time on Spill The Wine!  It was a great three weeks!

Popular posts from this blog

A Spill The Wine Photoshoot 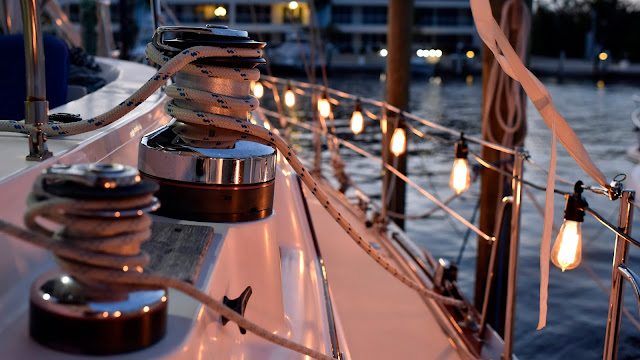 Before shoving north we decided to spend an evening taking pictures of the boat while she is all cleaned up.....
Read more 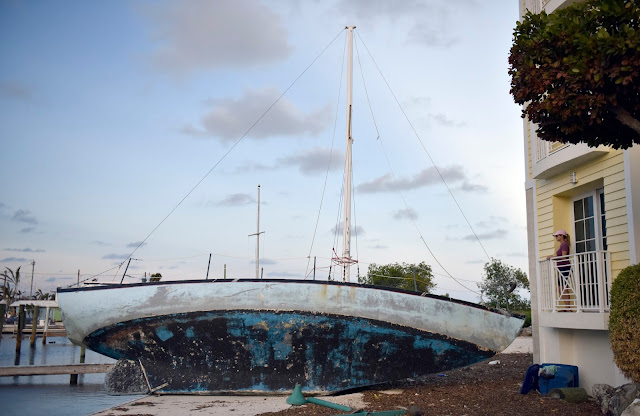 One could say Hurricane Irma missed us by 11 inches This sailboat washed ashore by the marina bedroom's balcony This sailboat was anchored in Rock Harbor, and I suppose technically you can say it still is.... because it's still attached to its anchor, which is still in Rock Harbor!  Its rode (anchor line) stretches across the side of our condo and over the rocks and is currently in the mangroves.  When the water rose, and the anchor dragged, the boat came ashore and deposited itself inches away ... 11 to be exact! Barb has to squeeze to get thru the opening We actually measured!  The boat placed itself exactly 11 inches from the corner of our unit without any evidence of ever hitting the building.  I spoke with the owner who told me it is an 18 ton sailboat; I can't imagine what 18 tons would do bashing up against a building.  So glad we didn't find out! This marina power pedestal was one of the few to survive Val, a former dock maste
Read more